Rhubarb crumble is the perfect classic spring dessert and is an English staple, in a similar way to a fluffy quiche. It always makes me think of Britain and reminds me of a time when we had an allotment a few years ago. When we took over the allotment I inherited an enormous rhubarb plant, that and a plot full of grass and weeds, it was literally the envy of all my neighbours – the rhubarb, not the weeds, that is. We could supply our whole street with a healthy stash of rhubarb throughout spring.

With its tangy and sweet flavour, you can spice rhubarb up with a bit of ginger, vanilla and cinnamon as we have done below. If you have too much rhubarb it can easily be frozen for a few months so don’t chuck it in the bin, just chop it up and freeze it until a later date.

Note that Rhubarb will shrink down as it cooks through, so don’t be afraid to choose a dish that fits snugly around the rhubarb.

For the rhubarb filling

Preparing the Rhubarb is dead easy. Cut the leaves off if you have them attached and wash the rhubarb stalks under a cold water tap. No need to peel at all. Then cut the ends to remove any brown bits or ends. Once done, cut the rhubarb into 1.5 or 2.5 cm chunks depending on what you prefer. Mix with the sugar and spice and pop them into an ovenproof dish.

Rhubarb is dead easy to freeze and will keep well for a reasonable time when frozen. To freeze make sure you cut the leaves off and wash the rhubarb under a tap. Then cut any dead ends off and chop them into smaller pieces of around 1.5 to 2.5 cm. Add them to a container and pop them in the freezer. If you’d like to prevent them from sticking together you can shake the container regularly until it’s all frozen solid.

To use, remove them from the freezer and let them thaw slightly or until they stop sticking together. Then use as normal if you’re baking a crumble you don’t need to defrost them fully, just make sure that they aren’t stuck together.

Rhubarb is best served warm while accompanied with cold ice cream or a bit of runny cream. You can of course eat it cold, but it’s so much better if the ice cream slowly melts over the crumble.

You can easily make a rhubarb crumble ahead of time and store it in the fridge overnight to reheat slightly before serving. 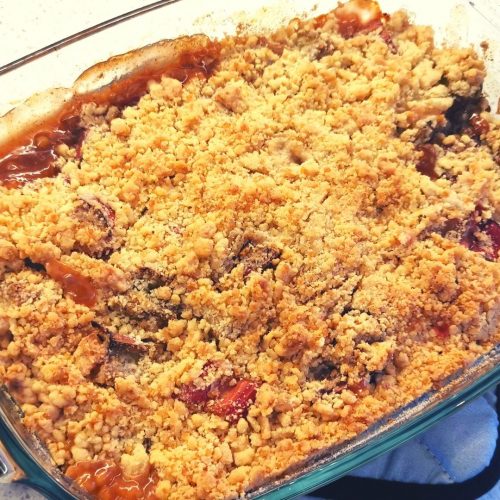 Rhubarb can be a bit on the sour end, so you may need to adjust the amount of sugar slightly to balance the flavours. The trick with this spring crumble is to get the ratios right. Adding just the right of sugar to lift the rhubarb without making it overwhelmingly sweet, then topping it with just enough crumble to balance the flavours perfectly. Couple that with a serving of cream or ice cream and you’ve got the perfect spring treat. You can play around with the spices if you choose and add other fruits such as apple.

Castor sugar will dissolve much quicker so we do recommend using castor sugar with the rhubarb and balancing it with rich and caramelly demerara sugar for the crumble.

Do you need to peel rhubarb for a crumble?

No, there is no need to peel rhubarb for a crumble or anything else for that matter.

Do you need to pre-cook rhubarb?

There is no need to pre-cook rhubarb as it will cook with the crumble topping. Rhubarb cooks really quickly and become luscious and soft without much hassle.

How do you sweeten stewed rhubarb without sugar?

To sweeten rhubarb without sugar you can add things like honey or maple syrup. You can also add a lashing of fruit juice such as apple or cranberry when stewing.

What flavours go good with rhubarb?