A Potato and Leek soup recipe, perfect for slow weekend cooking. Making the potato skin croutons is absolutely worth the effort in this case. But if you’d like to make this a quick and easy mid-week option you can skip the Tato Skin croutons and just add the potato, grated or finely chopped to the soup once the leeks and onion have caramelised.

This recipe is an all-time favourite, the trick lies in caramelising the leek and onion just a tad, not too much though, just enough to add depth of flavour is perfect. We’ve added a bit of courgette here to add more vegetable goodness, you can equally swap the courgette with carrot or leave it out if you choose.

To make the croutons you’ll need to bake the potatoes in the oven until the skin becomes slightly crispy. This baked potato tutorial is a good guide, baking the potato for an hour is a good rule of thumb. Once the potato is baked you can remove the flesh, as listed in the recipe but leave a bit of potato flesh for the croutons as the skin on its own will be too thin.

Once you’ve removed most of the flesh, add that part to the soup. Then sprinkle the skin with cheese of your choice and bake in the over for a few minutes until the cheese has melted and starts to brown slightly. Cut in bite-sized bits and serve with the soup or top and serve.

This recipe is definitely suitable for batch cooking and freezing, just double or triple the quantities as required. If you’d like to batch cook this recipe you will most likely have to sacrifice the cheesy potato skin croutons. Alternatively, you can freeze the potato skins separately and make the croutons using the frozen skins. Just defrost before adding the cheese and baking. 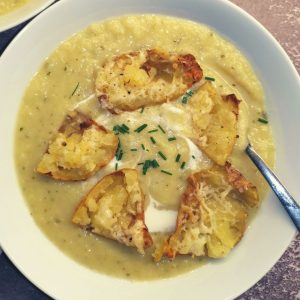 Bake the Potatoes and Make the Croutons