Mushroom Veggie Stroganoff is an easy dinner that feels indulgent but is still healthy without the meat. This recipe is perfect for vegetarians, flexitarians or families who would like to build more vegetables into their weekly menu.

Most Mushroom Vegetarian Stroganoff recipes only contain mushroom, but we’ve added green beans into the mix for a bit of variety and more nutritional value. If you don’t have green beans you can easily substitute for flat beans or asparagus sliced into strips and chopped.

Stroganoff is traditionally a Russian dish made with beef. The first versions of Stroganoff did not contain mushrooms or onions. It was a simple Roux sauce with allspice and a little bit of sour cream. The traditional side for Stroganoff is thinly sliced crispy potato straws, think McDonald’s fries but much thinner.

Mushroom Stroganoff is the perfect recipe for a Meatless Monday or to serve a meat-eater. It’s one of those recipes still rich in flavour that you can serve without missing the meat!

If you don’t want to go through the trouble of making potato straws you can serve your Stroganoff with mashed potatoes. See our recipe for Mashed Potato with Cream Cheese a fluffy and indulgent creamy mash.

Which Mushrooms Work Best for a Tasty Veggie Stroganoff?

We’d recommend using a mix of organic mushrooms, preferably ones that were grown outdoors (if you can distinguish them) as they are more likely to contain Vitamin D.

Vitamin D is more scarce in the winter months, so mushrooms grown in sunlight could potentially help to supplement Vitamin D levels, which is an added bonus.

Tips for Making the Roux Sauce with a Stroganoff

Making a Roux is easy in this case as adding the flour directly in with the veggies means all the veggies will help to break up the flour, reducing the chance for lumps. Once you’ve added the flour to the saucepan stir the stock in quickly to ensure the flour dissolves evenly. The olive oil added with the onions will double as the fat needed for your Vegetarian Stroganoff sauce.

This is a Vegetarian Stroganoff recipe as it contains sour cream, but you can easily substitute it for a vegan sour cream alternative. We wouldn’t recommend adding a meat replacement into this recipe as processed meat substitutes are generally not good for your health or your waistline. 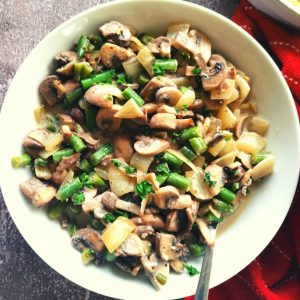 Notes on the Recipe’s Nutritional Value

Nutrient values will vary depending on the type of mushroom you’re using for your Stroganoff. Mushrooms, in general, contain protein and are rich in the Antioxidants; Selenium, Vitamin C and Choline. It also contains potassium, magnesium, copper, zinc and a few B vitamins such as folate.

To complement the mushrooms, green beans contain Vitamin C as well as a good amount of Vitamin K, which is great for bone health.

Green beans are seasonal May to October and Mushrooms can be found year-round.

You can find out more about which cookies we are using or switch them off in settings.

This website uses cookies so that we can provide you with the best user experience possible. Cookie information is stored in your browser and performs functions such as recognising you when you return to our website and helping our team to understand which sections of the website you find most interesting and useful.

Strictly Necessary Cookie should be enabled at all times so that we can save your preferences for cookie settings.

If you disable this cookie, we will not be able to save your preferences. This means that every time you visit this website you will need to enable or disable cookies again.