Halloween is one of my favourite holiday baking occasions of the year. It’s when you can have a little fun and be a kid again for a while. These Halloween ghost cookies are filled with a spiced cinnamon strawberry jam, this adds a little sweetness to a Halloween themed get-together.

The meringue itself is easy to make. The trick is to use an electric beater and not to get any of the egg yolk mixed in with the whites. Once you get that right, it’s easy sailing. Finish the meringues off with a simple piping technique that even a novice can master in no time. Use a piping set like this along with a Wilton #30 tip or equivalent.

Seeing that it’s Halloween, we used a festive spiced filling with strawberry and cinnamon, but you can equally use Nutella chocolate spread or chocolate buttons with a bit of spice on top. If you’re using the jam, this will run out a bit onto the tray, but don’t worry as that helps to create the sticky and toffee-like sweetness that makes these Halloween ghost cookies extra nice.

The Secret to Piping

Well, the secret to piping is that you have to give it a go and practice before it will be perfect. Piping bags can be a messy affair but at the same time, it’s super fun. Fill your piping bag with the mixture and make little whirls on the baking tray starting a bit bigger at the bottom and working your way up with smaller circles, there will be a few wonky ones, but that adds to the homemade feel. To make space for the filling start with a full circle at the bottom, move your way up to the second layer, but leave a gap for the filling. Then take a spoon and drip the filling into the centre, use the piping bag to complete the ghost’s body and whirly head as shown below.

To make your baking efforts more sustainable and eco-friendly we recommend using eggs from organic, pasture-raised hens if they’re from regenerative farms that are the ultimate best option. Pasture-raised means that the hens are raised outside and eat a more natural diet, they’re allowed to forrage at their own leasure. It’s what nature intended for them right? If you’d like to learn more about regenerative farming, read our post here. In short regenerative farming works with nature, allowing a range of animals to graze a pasture, protecting soil health and reducing carbon emissions. 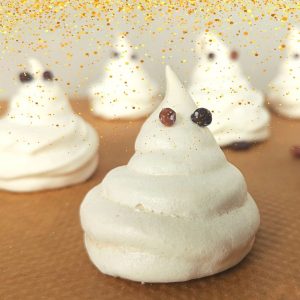